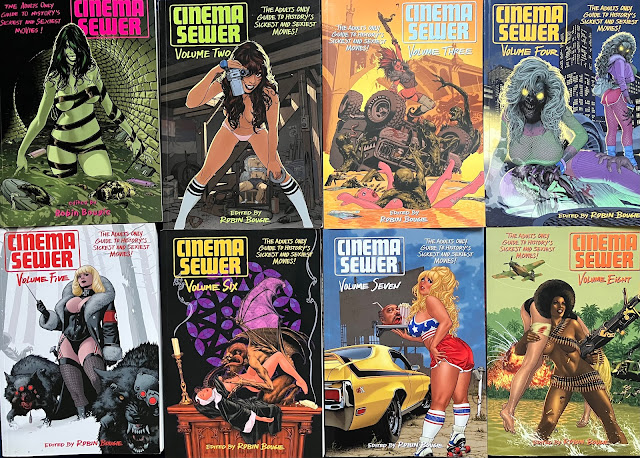 Breaks my heart in bidding goodbye to Robin Bougie's utterly depraved and thoroughly addictive comicbook style filmzine, Cinema Sewer. The lauded collected trade paperback (the comic books were harder to find) which covered a plethora of film genres and related subject matter in a similar way to Warren Oates with a Gatling Gun in The Wild Bunch (1969), had its its eighth and final volume published this summer.

With a hunger for exploitation films, it was only natural that I would eventually stumble upon these books at some point in time. Cinema Sewer was always presented in a crudely unorthodox and amateurish style; it consisted of hand written body text, low-res black and white photos, archival flyers and wildly pornographic drawings. The Marmite of film literature, if you will. This resonated with me more than any expensive, film-related, coffee-table book. Bougie's primitive scrawlings and rants wouldn't be amiss on the walls of a festering public urinal, but they also happened to drop some serious knowlege, and schooled me on a vast array of films.

Admittedly, Bougie's primary passion for pornographic film would often usurp his coverage of other content at times. However, his sleazy critiques would often prove invaluable. They would permeate into more traditional film reviews/coverage, resulting in some hilarious quotables. Here's an extract from Bougie's review on the film-noir, This Gun For Hire (1942):

"Ellen is smoothly played by the incomparable Veronica Lake, who looks fantastic in every single goddamn frame of this movie, and makes my dong wish that it could take a nice vacation fifty years in the past and go nestle itself between her perfect ass cheeks for a weekend." - Robin Bougie, Cinema Sewer Vol. 4, FAB Press, 2013.

7. Action Slashers: The Rise and Fall of a Genre

10. The 10 Most F@ckable Moms in TV Sitcom History

11. Kill Yourself on Live TV: A Complete History of the Practice

12. Chicks in Chains: The Filipino W.I.P. Cinema of Roger Corman

15. How I Became an Action Movie Star in Indonesia: The Awesome Story of Peter O'Brian

17. The 75 Most Entertaining Documentaries Ever Made

22. The Top Twenty Most Underrated American Films of the Eighties

24. The 20 Most Underrated and Undiscovered Must-See Movies of the 1990s

Cheers for all the schoolin', Robin! All the trivia! And most of all, thanks for all the laughs! Farewell Cinema Sewer!

10. The 10 Most F@ckable Moms in TV Sitcom History

11. Kill Yourself on Live TV: A Complete History of the Practice

Since it was around before the blog game and Bougie's articles were always hand-written, I can't really find any extracts from Cinema Sewer online. Here are scans from I'll Kiss Anythinf that Moves: TV Just Castrated My Favourite Movie:

Repo Man gotta be the only movie with a TV edit that's as good as the theatrical version. "Melon farmer" is a G.O.A.T overdub.

Never seen the TV edit of Repo Man. I know it's why the censorship monitoring site is named after it, though.

Caught Celia the other night. More a drama than a folk horror. Good film, anyhow.

Handy video of the many clean overdubs in Repo Man.

G.O.A.T TV edit Repo Man scene would have to be this. How you gonna have Harry Dean Stanton smash up a a public telephone with a mallet and then not put it in the official version of your movie?

Wouldn't surprise me if it's made available as a special cut for aficionados, perhaps during a milestone anniversay of the film. Carpeneter's Halloween has bunch of made for network TV scenes which became available in 2000 as the Extended TV Version. They were however shot while the sequel was being filmed, though.

By the way, asked Gloss to rescue your account. PW: Willhigh2022

I think the TV version is on the Criterion release but I've never gotten around to buying it.

It’s available on Eureka’s Masters of Cinema release, too. Ought to give it a watch as I’ve feenin’ to revisit the film for a while now.